The relevance of a well thought-out fire protection concept, the careful selection of room closures as well as the correct planning and flawless installation of fire and smoke protection doors is enormously high. Structural, technical and organizational fire protection measures can ideally prevent the outbreak or spread of fires and facilitate the rescue of persons in the event of a fire. However, this duty of care applies not only to the time of installation, but also to the entire service life, because recurring inspections and maintenance by manufacturers or experts are also required during the subsequent period.

The primary goal is always to prevent fires, but unfortunately this credo cannot always be implemented. This was once again demonstrated by the major fire on the premises of the ÜSTRA bus depot in the Mittelfeld district of Hanover. On 05.06.2021, the fire department was alerted at 12:45 by the automatic fire alarm system of the depot of Üstra Hannoversche Verkehrsbetriebe, so that the task forces arrived at the scene as quickly as possible. The warehouse on fire was bursting into flames and there was a danger of collapse, so that the firefighting attack could initially only be carried out from the outside and alarm level four (out of a possible five) was triggered. The fire department received light support from a heavy thundershower, which in the meantime supported the firefighting efforts. In the end, the Hanover fire department was able to extinguish the burning, approx. 60x20 meter large storage hall for electric buses with a large contingent of emergency personnel.

Fortunately, the solid structural fire protection provided by our long-standing customer Üstra prevented the fire from spreading to other areas of the very extensive hall complex. And yet: five electric buses, two hybrid buses and one diesel bus were completely destroyed and a coach was severely damaged outside. In total, the damage amounts to several million euros and without the well-functioning fire protection measures, the damage would have been many times higher.

Keeping the damage as small as possible in an emergency is the basic principle for structural fire protection requirements. In 2018, Üstra carried out a conscientious basic renewal of the fire protection doors. At that time, four 1-leaf Jansen T90 sliding gates measuring 4000 mm x 3900 mm were delivered and installed. The gates were equipped with a thresholdless wicket door (1000 mm x 2000 mm) and coated in RAL 5002 according to the customer's request. Furthermore, the gates were equipped with a hold-open system and 3 smoke detectors each. Following the installation, the gate systems were inspected by an expert and last checked for possible defects by the Jansen company in June 2020.

We are glad to have made a small contribution to fire and damage minimization in this context. 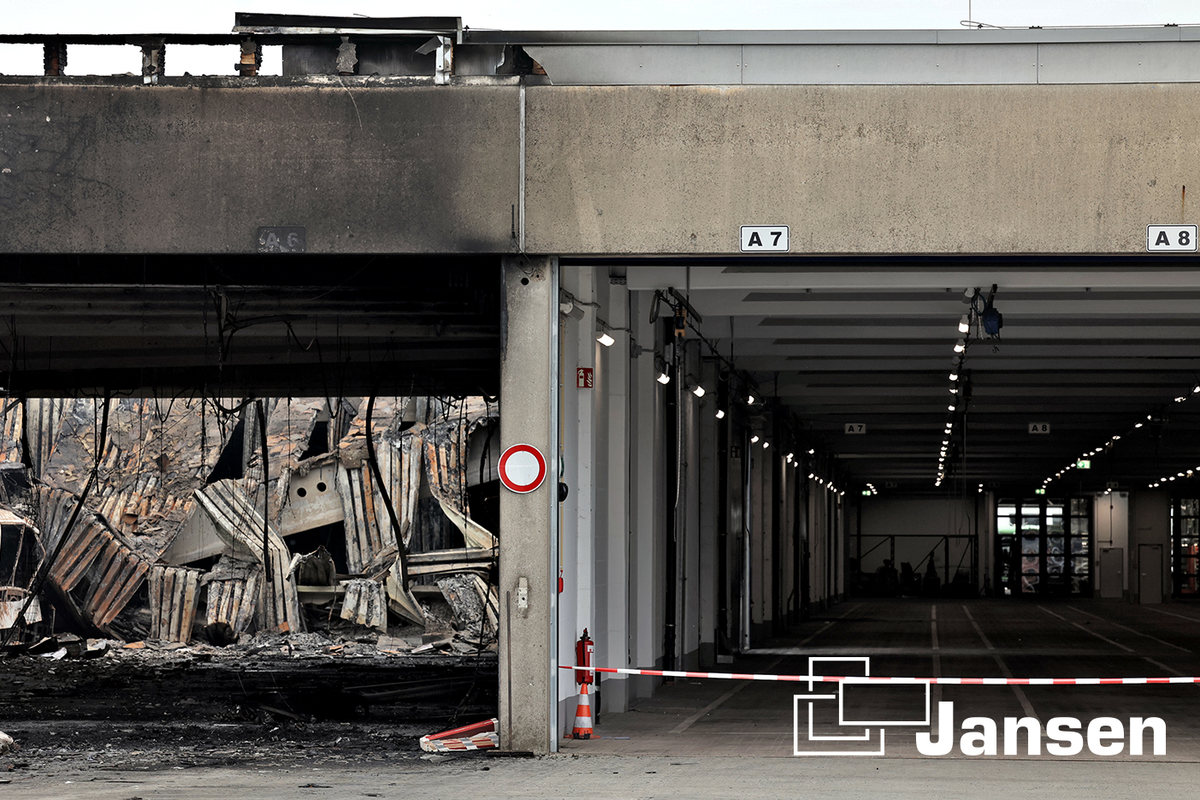